Yale iGEM Presents its Work at the 2014 iGEM World Jamboree 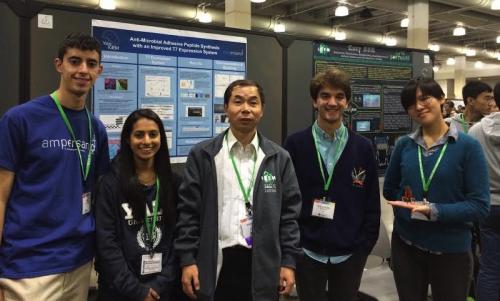 This year, four Yale iGEM team members, Ariel Hernandez-Leyva ’16, Stephanie Mao ‘17, Yamini Naidu ‘17, and Alex Buhimschi ‘17, presented their findings at the 2014 iGEM Jamboree held at the Boston Hynes Convention Center from October 30- November 3, 2014. They presented their work, entitled: “Anti-microbial Adhesive Peptide Synthesis with an Improved T7 Expression System”, as an oral and poster presentation in the “Manufacturing” category of the competition. Their work was intended at developing a commercially viable synthetic route to make an anti-microbial adhesive peptide that could be applied to medical implants and ships’ hulls to prevent biofilm formation. This task proved extremely difficult due to the innate toxicity of their recombinant peptide, resulting in poor colony yields. Therefore, the Yale team attempted to modify a “Ribo-regulation” system developed by Isaacs et al. in 2004 to tightly regulate synthesis of the peptide. More details about the Ribo-regulation system can be found in the Isaacs manuscript here. While the team wasn’t able to show successful synthesis after the summer, two researchers, Ariel Hernandez-Leyva and Alex Buhimschi, are currently continuing the project in the aims of a publication.

More information about the 2014 project, including detailed results can be found on the team’s 2014 wiki. Note that iGEM did not hold regional conferences this year, as they were celebrating their 10-year anniversary as a competition. For their efforts, the Yale team returned from Boston with a bronze medal.